As I built the web pages for the Finance section of this site as part of it relaunch, I realized that I wanted to put much more into the description of how I got my financial education.  Here is a brief history of my investment education.

My education really started when I was in elementary school, when my father purchased some minimal amount of stock in a company called Seaboard Coastline which was a regional railroad covering the southern part of the eastern seaboard of the USA.  It was purchased in what is called a Dividend Reinvestment Plan (or DRP — pronounced “drip“).  So, each quarter we (mostly dad) received a report showing the quarterly dividend and the number of new shares purchased with that money.  By the time I was interested in paying attention to it, it had gone through a few mergers and acquisitions and was now known as CSX.  It was a merger of the Chessie system, Seaboard Coastline, and the bankrupt railroad that the government took over in the 1980s.  The end result was that the little investment that my dad made in the 1970s was worth something like 16x it’s original value when I sold it.

The next phase of investment education was when I was in college and for the fun of it I picked a couple of stocks to watch (no money) and each day would go into a library and find the values of my stocks each weekday.  I remember one of the companies that I picked was a company called Farah Manufacturing as it was something less than $10/share.  That wasn’t too long after Charlie’s Angels and Farrah Fawcett were popular and I probably had an incorrect idea that the two were related.  At any rate, I saw the price rebound several fold while I was watching it.

The next decade or so I was busy in the world world and not paying much attention to the market.  However, that changed when I read Robert T. Kiyosaki’s book Rich Dad, Poor Dad.  In it he broke down the concepts of cash flow and balance sheet to simple diagrams and the concept of passive income was very interesting.  His book tended to focus on real estate investing as the method to do this, and I was more interested in “playing the market” rather than becoming a landlord.  I decided that I would study more on investing in order to get ahead that way. 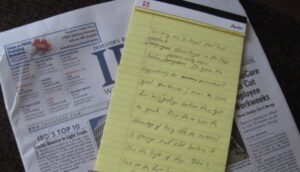 The key book for this study was The Motley Fool’s Guide to Investing, which took a step approach to investing the starts with buying the market as a whole via an index fund all the way to evaluating individual companies by reading through their quarterly and yearly SEC documents and crunching the numbers.  One thing they referenced as a good source of data was Investor’s Business Daily which had a weekday financial newspaper and followed something called CANSLIM investing.  That basically taught me how to use both fundamental and technical investing together to buy and sell stocks.

Also during this time, I found out about stock clubs through Better Investing which was an aggregator of stock clubs using the Stock Selection Guide (SSG) to evaluate companies using fundamental investing principles.  I found out about, and joined a stock club made up of friends and former co-workers and spent about 10+ years with them which included the heady times of the 1990s and into the 2000s.  During that time I also joined the American Association of Individual Investors (AAII) and have been a member of that organization since.

So where am I now?  Well, I know enough to understand both the stock market as well as how to evaluate individual companies.  I’m not in the same league as Warren Buffet, but it is fun to me to evaluate companies to, as we used to say “buy a good company at a good price.”  I’ve put that to good use at my company to be able to help others who may not have had the interest I did in stocks and the financial markets.

I’m not sure where my interest will go next, but I do at least try to keep track of the overall market, even if I’m not able to spend as much time looking at individual stocks as I used to.